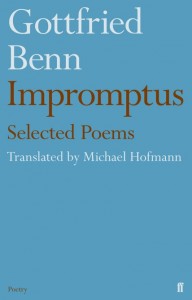 I first came across the work of Gottfried Benn as little as seven years ago when I read Michael Hamburger’s The Truth of Poetry, a book which ever since has been something of a touchstone for me whenever I find myself wondering about poetry and why it’s important. Benn (1886-1956) was born in the north of Germany and lived through two world wars, the early tragic death of his first wife, the suicide of his second, the suicide of his mistress, and a Nazi regime he first embraced for a couple of years (1933-34) and then turned against as it turned against him, although his silence in the face of horror was problematic, as much to himself as anyone else after the war ended, and perhaps contributed to the depression of his later years. His work has not been easy to find in English translation and it is therefore good news that the end of 2013 brought a flood of Benn publications in English: three books, or perhaps we could call it two-and-a-half: 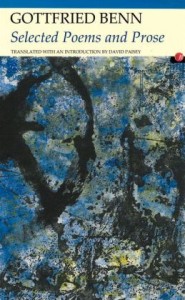 The Faber Hofmann contains only poems in English translation. I don’t have the FRG Hofmann but I’m assured that it contains the same poems plus the German originals and some prose. The Paisey is also a bilingual edition with about 100 pages of translated prose. Hofmann translates mainly Benn’s early and late work whereas Paisey also gives a generous selection from his mid-period in the late 20s and 30s. I’d say that both the Paisey and Hofmann are worth getting hold of: many poems in one book don’t appear in the other and comparing translations of those which do is fascinating. I think Hofmann wins most of the direct clashes, but Paisey’s translations are very readable as poems and he has translated far more of them.

Benn’s early work in 1912 and the decade that followed cemented his reputation as a central figure in the literary Expressionist movement. It is provocative, often chilling, and Benn’s dispassionate delivery makes it feel even more so. A hundred years on, his ‘Little Aster’ is still liable to shock anyone reading it for the first time. A drowned man is washed up on shore, an aster between his teeth. The narrator is dissecting the body and, as he sews it up, he packs the knife and the aster inside, and finishes:

Drink your fill in your vase!
Rest easy,
little aster!

That “rest easy” rumbles uneasily. A similar uneasiness emerges in ‘English Cafe’ where the narrator looks on, with a degree of lust, at “Rachel” whose “hand is clay/ sweet brown, almost eternal”, at “fields dying/ the death of asphodel” and at lips whose blood-colour seems to be “rustling through a mouth’s first autumn” [quotations from Paisey]. Such proximity of death, despite an appearance of vibrancy, is typical of Benn. The final stanza is an opportunity for comparison:

O aching brow; sickness deep in the mourning
of your dark eyebrows! Smile, be bright:
the violins are shimmering a rainbow.

O weary head. Invalid, deep in the mourning
Of your swart brows. Smile, brighten, why don’t you:
The violins are sawing a rainbow.

My German is useless, almost non-existent, so I’m dependent on the translations. As poetry in English, the Hofmann seems much stronger to me here. But I’m looking at “schimmern” which, literally, does mean “glimmer, shimmer”, as Paisey has it (I presume with acerbic irony?!). On the other hand, it’s used here in a transitive sense. Usually things (in English, at least) simply shimmer, they don’t shimmer something else. In English, “shimmer” is often used badly by poets for faux-emotional effect, to create a kind of floaty, indistinct feeling in the reader’s mind. I don’t know whether the word has similar connotations in German, but Benn uses “shimmern” as a verb acting on an object. The violins shimmer the rainbow. Hofmann makes a bold translation decision. He hears the violins as saws, and I’m sure we’ve all heard violins played exactly like that. Does “sawing” make sense given the warning note that underpins the rest of the poem? Could this have been exactly the image Benn had in his mind, the sound scraping through his brain?

There is a great deal of humour in Benn’s work, even if the laughs are pitch dark. ‘Foreign Ministers’ perhaps describes today’s politicians every bit as much as those of Benn’s time:

…you have to be able to feel the man’s character
through the whole: seriously high flyers have it,
not through some processes or other,
but the moral equivalent of sex appeal.

And in ‘Restaurant’, which begins with cigarettes and alcohol (many of Benn’s poems feature him downing a few beers), he writes:

Death has absolutely
nothing to do with health and sickness,
he just uses them for his own purpose.

Paisey translates plenty of Benn’s mid-period poems, many of which employed octaves with a tight rhyme scheme and two-to-three stress lines, and Paisey even attempts to replicate this in English. Hofmann bypasses most of them, feeling they are “too difficult and idiosyncratic for me to carry them into English in any important way.” He asks what the English might be for Benn’s “Banane, yes, Banane/ vie méditerranée” [from ‘Banana’] – a fair question! Paisey obliges with:

Sex, death and idiosyncratic difficulty are certainly captured by Paisey in this first stanza of six and his extensive selection of mid-period Benn is good to have available in translation.

Benn’s later poems maintain a note of gloom, but they are much less coolly observed than the early poems, as if Benn’s life experiences had led him to express himself in a more immediate way. If his poems could be said to mirror “oil-slick impressions/ of the higher life” [‘How are the beech trees in September’, translated by Hofmann], they are also unexpectedly moving. Benn’s final poem, ‘Can be no mourning’ (or ‘Can Be No Sorrow’ in Hofmann’s translation), a meditation on death with reference to some of Germany’s greatest poets, written only a few months before Benn died, is both sad and beautiful. For example:

We carry in us seeds of all the gods,
the gene of death and the gene of bliss –
who could separate them: words and things,
who mingle them: torment and the place
they end in, wood and streaming tears,
for brief hours a pitiful home.

The poem’s closing line, “Sleep well” – as Hofmann points out in – is “at once a close echo and a world away from the cynical rest easy” of ‘Little Aster’. 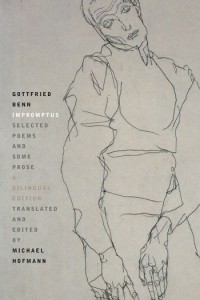 Whatever feelings Benn had about himself and his personal failings as a human being, these new translations of his work may be the most important poetry event of the last year. Both Hofmann and Paisey refuse to gloss over Benn’s political and moral inadequacies, and some of the prose (one essay is included by Paisey for its “toxicity”) lays them bare. But the excerpts from Benn’s prose on poetry, art and power are worth buying the books for alone. He was an unusual character – isolated and unsociable (except when it came to relationships and affairs with women), obsessively committed to his art, abhorring the mediocre, an aesthete who cared nothing for trends or movements in poetry and who yet (in spite of himself) craved recognition and succumbed, usually at the wrong times, to its allure. Benn reckoned that “none of the great lyric poets of our time had left more than six to eight perfect poems,” the rest being of interest only in relation to an author’s biography and development. “These six poems are the reason for the thirty to fifty years of asceticism, suffering and struggle” [from Benn’s ‘Problems of Lyric Poetry’, translated by Paisey]. Benn assuredly met his own standards of greatness. Perhaps we might view his achievement the way Benn viewed Chopin’s. Once read, once heard, you “will not easily forget it” (‘Chopin’), even though

He composed no operas,
no symphonies,
only those tragic progressions
from artistic conviction
and with a small hand.

From 1st July 2021, shipments from the UK to EU will be subject to Value Added Tax (VAT) charges). Orders placed through Magma Poetry are shipped Delivery Duties Unpaid and customers in the EU may have to pay import VAT (and customs duties if payable) and a handling fee in the receiving country.
Latest issue
Magma 82 — Obsidian

Edited by Nick Makoha and Gboyega Odubanjo with Zakia Carpenter-Hall 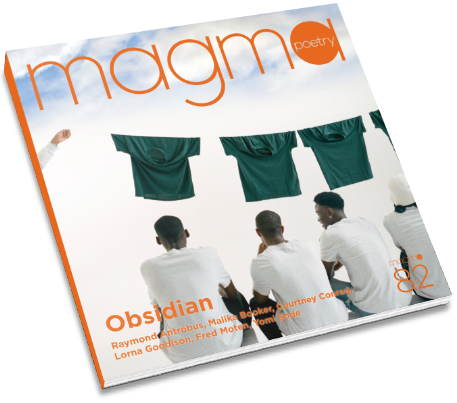 Thanks to everyone who voted for @magmapoetry for @SabotageReviews Awards Festival 2022. We are thrilled to make it to the shortlist & in brilliant company. Your support means everything. Keep on voting ! https://t.co/p2nIRbEBZ0
h J R
@MagmaPoetry

* The submissions window for ‘Physics’ is open from 1st March – 31st March 2022. Magma 84 on the theme of physics is edited by Susannah Hart and Stav Poleg. We welcome poems that have not been previously published, either in print or online. Up to 4 poems may be sent via Submittable, or by…