There Will Be No Miracles Here
Stephen Sawyer
Smokestack Books, £7.99

Stephen Sawyer’s first collection, There Will Be No Miracles Here, is governed by a sharp poetic ear and eye as it attends to Northern past and present, through the heartfelt rootedness of an alert and imaginative gaze. Sawyer’s poems mediate wide-reaching questions on identity, class, belonging, agency and who holds power over private and public histories which weigh on the very real and human voices pinned through the text. This book is a passionate, authentic and exquisitely executed portrait of changing landscapes and borderlines. Be it in the Northern city from which he writes, or “between Tulkarm and Ramallah” when asking whether “the eggs in the fridge need a permit” (Permit), Sawyer’s most poignant concerns lie in the fine details.

In Draft for the Contemporary Love Poem, Sawyer writes:

He makes the metaphor (and language) overtly political, contemplating the violence of naming, renaming and re-historicizing through linguistic jurisdiction. The last stanza of fourteen summons a listening “black bird”, leaving the other thirteen stanzas to their various mediations on love. A nod to Wallace Steven’s ‘Thirteen Ways’ perhaps, and the wider literary tradition that imposes itself as heritage on a poem so bold as to talk about ‘love’. Sawyer smirks head on at that pressure:

——-it finds time for sarcasm,
——-places a rose at your feet.

Sawyer, as “Eyewitness […] pencil-in-hand, foredoomed to record” (Eyewitness), makes his book of poems a labour of ‘love’ for those who precede the moment in which he writes:

——-A practical description of love
——-is the discernible hands
——-of an ancestor, under-coating
——-white shutters, high ceilings
——-and sash windows

The people in this book seem to live out their politics in the mundane (Orgreave Mass Picnic) – “People I haven’t seen since the strike/ greeting me on the battle site/ where the miners fought to stop/ the flow of coal in and out”. Yet the speaker undercoats and galvanizes aspects of their hard bordered lives and spaces with brilliance at every turn: for example, “a mother’s valium lips, thinking/ without bannister rails”, “tea breaks” or “pears and carnation milk for tea”; a woman who “sold her wedding ring to pay/ the lecky bill’, and the “soup in a cereal bowl/ with the hairline crack”(The Six Goodbyes of the Eightfold Path).

“Can you hear the pit yard sing?” asks the speaker in Orgreave Mass Picnic; a refrain that affirms a lyrical undertone and carries the book through some rough realities in the same way that the oral traditions Sawyer regenerates might have functioned for the communities that practiced them.

Through a series of linguistically imaginative poems stitched with rhyme, imagery, humour, colloquialisms and generous thrift, Sawyer speaks to and about many political questions, without sacrificing either his art or faithfulness to the voices and lives that so vibrantly inform this poetic work.— 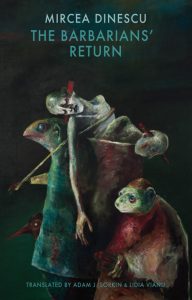 Considering the consequences of a society’s “birth in the manger of cold war”, Mircea Dinescu’s The Barbarians’ Return deals on the surface with grand political themes such as capitalism, communism, the Cold War and revolution. In the inaugural poem Discourse upon Europe’s reception of an eastern country, a drunk “throws open a window and screams/ Welcome, consumer society,/ come, kill us too/ like all the rest”.

Closer attention to the poems elucidates a more subtle and intricate politics woven through the language and picked out in everyday details that raise themselves as the real revolutionaries of this work. In the closing poem Artist left out in the rain:

Using the language of detail as his “pickaxe” (Poet’s Confession), Dinescu allows us to “peer in” to a world often walled in by the “grand themes”. His poems often invoke the clean, simple, universal image or point of reference, such as “tea” and “bread” that work well to cut across the borders of these geographically-specific texts. From Tea: “P.S. Because the only thing left for us/ was to scatter our poems to the wind,/ […] and this is how we paid for the tea – your tea or your life.”

As a way of illustrating more abstract themes, Dinescu showcases the intricate detail, to broach the gap between theme and reality and alleviate the pressure of weighty content. Often threading satire through the poems, the speaker switches into infantile tone and perspective “to bathe them in reality: plop!” (Don’t worry). In Futile attempt to make a dinosaur move, he writes of “the prehistoric animal of our love:/ whoo whoo, it goes, whirr whirr”.

The use of onomatopoeic syntax and childlike register also functions as a suppressive sinister device, operating with refrains and repetitions to produce linguistic disturbance that surfaces intermittently throughout the text, as in Let me tell you: the scoundrel’s lost his sense of honour:

Sometimes, those disturbances take the form of abrupt and irregular line-breaks, presenting stark visual juts and disjuncture. These often work in alignment with content, but in some cases the line-breaks are a touch contrived (Letter to Václav Havel, thrown into the wastepaper basket):

——-I just can’t get used to the idea that
——-the eagle
——-works for the sanitation department.

That said, despite such minor problems, this is an otherwise refreshingly daring, thoughtful and engaging body of work that demands attentiveness.

Tracy K Smith’s fourth collection Wade in the Water deals with the violent heritage of its past, tethered umbilically to its present American and global moment. In absolute recognition of the thing “leaping” in the “chest”, her poems challenge the implicit violence in a “Welcome” that fails to recognise the heart of the “dark bod[ied] […] invade[r]” (The United States Welcomes You). The private and the personal, the everyday detail and the distinct voice, are called upon once again to make the grand abstract themes precisely concrete and real from the “desolate luxury” of “black beluga” trails to an erasure poem, Declaration, “drawn from the text of the Declaration of Independence”:

Form plays a major role, from the fragmentary free verse erasure poems to Ghazal, which follows the couplet end-rhyme scheme and conforms to key traditions of the practice. In Ghazal, the politics and violence of language is raised, with similar concerns to Sawyer and Dinescu around renaming and historical erasure. The collective voice ruminates over the love and loss, or rather theft, of “our name”. Wade in the Water wields language back on itself and the past it has been used to paper over.

History therefore is prised open to make space for the authentic voices of “letters and statements of African Americans” involved in various capacities in the Civil War. Their traumas are then wrenched by Smith from their pasts into the present.

Responsibility for the oversized livers of “rats and rabbits” poisoned by “perfluorooctanoic acid”, for the dangers of our contemporary age, and for the future, is laid squarely at our feet. A tender poem on parenthood entitled 4½ bursts with imagery and the realisation of these concerns in the child who “Morning finds […] curled like a prawn/ Around a stuffed blue Pegasus”.

In Theatrical Improvisation, we are asked implicitly how many times we might need to see the same scenes of violence played out in history, albeit with different ‘actors’ at a given time, before we believe it is the real thing:

Maryam Hessavi is a British, Manchester-based poet and critic of English and Iranian descent. Her work is featured or forthcoming in Poetry London, Ambit, The Guardian, The Poetry Review and others.

@magmapoetry: Magma's poetry competition is open for submissions! Further details about how to to submit are located on our website💫 https://t.co/MuLJ9Ufsca https://t.co/snuWQmGMx7

Magma's poetry competition is open for submissions! Further details about how to to submit are located on our website💫 https://t.co/MuLJ9Ufsca https://t.co/snuWQmGMx7

@exacteditions: "I was thrilled to have one of my poems chosen by @magmapoetry, a life-long ambition to appear in one of the most prestigious magazines in the UK." This #PoetryWednesday, discover @wordpoppy's 'Press Officer' inside Issue 74: Work of @magmapoetry 👇 https://t.co/C569yBTiO9 🖋 https://t.co/FeZYkaS9MW