skip to Main Content
SO YOU WANT TO BE SOMEBODY ELSE?
by Owen Vince

“Now tell me, please, what guarantee do you possess that those beloved ghosts are genuine; that it is really your dear dead mother and not some petty demon mystifying you, masked?”

‘I am going to take your face’—dramatic pause for effect—‘off’. This, a line from John Woo’s 1997 film Face/Off, brings about a rare kind of castration anxiety. To have your face cut off. To have your face taken away. To lose your face to another person and for them to assume your identity (your face), while you assume theirs. You’d be wrong to call Woo’s monument to violence a ‘subtle’ film. But this line, dropped with snarling and operatic gravitas, causes deeply buried parts of me to come undone.

Press pause, rewind the tape. In 1966, Hiroshi Teshigahara released The Face of Another, a film that has largely been forgotten among the annals of the New Wave. Here is something cool and Kubrickian, equally slick and odious. A tale of assumed identities and unsettling, existential crimes. Like Face/Off, its central agony lies with a gruesome industrial accident which leads the film’s protagonist, Okuyama, to the office of an experimental cosmetic surgeon. You’ll guess where this is going. Okuyama walks away from the operating table with the face of another (big surprise, that). Newly fleshed, he is filled with a dolorous, decadent confidence. Now I can do anything, be anyone. Long story short, it drives him quite mad. For Kristeva (the psychoanalyst of our most devious concerns), this existential wounding might raise the gory spectre of the ‘abject’, that order of reactions which lead the subject “toward the place where meaning collapses”. Shuddering, vomiting, weeping. When we encounter the ‘abject’, we trip over the gruesome feet of death. Lose your head, lose your mind.

All of this pretending who you aren’t, what you aren’t. It’s the stuff of Halloween and chat rooms, of Cat-fished loves and mistaken selves. The avatar is a vessel temporarily filled – something you pour yourself into (fluid, brackish), climb into, a form assumed. Maybe Kristeva would see the fun of it.

Who knows? After all, there’s something quite thrilling about this easy abandonment of self. The ‘avatar’ grants you the stolen armour of another. It frees you from the hammers and blows that would otherwise befall you. Reap the benefits of their life, bask in their glory without assuming the risk. The avatar, like Jung’s conception of the double, permits us to exercise our secretive desires. Acting in ways that are typically (let’s say, socially) taboo. In a video game, the player can lift cars over their heads, or penetrate the darkest depths of space. On a forum (let’s say), the user – otherwise cloaked – might experiment in views that they wouldn’t want associated with their workaday lives. A collective mass hiding behind (or inside of) the pouty grimace of a poorly-drawn frog, thousands have said and done peculiar (and often deeply reviled) things. The avatar is a vessel for subjectivities that already exist, albeit buried.

But the avatar’s meaning fits awkwardly over the idea of simply ‘taking’ another identity. It’s more than that. Properly speaking, the avatar has two faces; one sacred, and one profane. In Hinduism, the avatar is a holy being visiting a body upon earth, an ‘incarnation’. In the realm of video games, meanwhile, the avatar is the immortal digital body inhabited by the oh-so mortal human self. In Greek mythology, a god who enters the body of a bull or the flesh of a swan. The Eudaemon or spirit who attends to the chosen, whispering advice and opinions in their ear (suddenly, we become the puppet). In chat rooms, the user becomes user_47083, or King Bong. Clearly, we have entered the terrain of the uncertain, where the play-acting of gods and spirits shares the same stomping ground as the banal posting of, well, ordinary people. And what kind of holiness can be found in a post?

Sacred and profane. Banality and spirituality. There is disaster and delight. The avatar can drive us mad (just look at poor Okuyama), but it can also represent a moment of holy manifestation, of power and freedom. This is getting tricky, quickly.

Well, let’s address the elephant in the (chat) room. Of James Cameron and his Avatar of 2009. Wounded, Jake Sully – our protagonist – slips into the agile body of a muscular blue alien. He runs, leaps, fights, benefitting from all the advantages of a body (not his) that he wears like a cloak. But here, Cameron finds something ravishing. Jake decides to stay in that cloak, liking its fit, appreciating the boon. And it’s only when he abandons his own corporeality entirely that he finally feels at peace.

Let’s put it another way. Can you really have both?

When you experiment with an avatar, you are in many senses transferred—re-routed—into another ‘self’. And the digital metaphor is appropriate here, apropos of everything. Online, we dip into a pool of possibilities; a photo that is not your ‘own’, a name that doesn’t belong to you. You can be anyone. Or claim to be. But still, those old doubts hold on, tie you down. As Okuyama found, you can look like somebody else, but you can’t be somebody else. Appearances can be, well, misleading. Most of all to ourselves.

But society sensed that something was wrong, even then. Early records date the origins of these masked festivities to the 13th century. The city’s grand council (so it goes) made it a crime for revellers to throw scented eggs, or ovi odoriferi. Eggs injected with rose water, ink. Eggs that aren’t eggs, actually. Clearly, masked misbehaviour was a big problem. Gambling in a mask was also banned. As much as this cultural disfiguration was largely ‘allowed’, it was not gladly condoned by the city’s magistrates. Nuns of the ‘serene city’ disguised their identities, meeting up for nightly liaisons. Rumours were stirred, secrets spilled. Oscar Wilde knew what was up. “Give him a mask and he will tell you the truth”.

So. The avatar – a mask slipped over the face – helps us to disintegrate and to reintegrate again. Game console, press a button, choose a character. Being who we are not is an act of not undesirable creativity. Who wouldn’t want to appear otherwise? But maybe I’m projecting my own desires. Look, what’s wrong with wanting to come across differently for a day? The avatar (a mask we wear, like the face of another) short-circuits the world, for a moment. We might descend into the hell-worlds of an alien planet’s core. We might drive a taxi or fly a plane. Simulation is the avatar of the productive economy. What’s it like to drive a rig around America? Pretty cool, pretty great. But I’m not sure I want that life.

In Thomas Bernhard’s 1975 novel Correction, we’re subject to a hypnotic, collapsing mirror-world based on the life of philosopher-architect Wittgenstein. A mad-man in a forest (now dead), who the narrator—a friend—seeks to comprehend. Notes, understandings, a twisted reckoning. Locking himself into the room where the mad-man locked himself before his suicide, our narrator slowly merges with the lyrical tics and declarative confusions of this other departed man. And bit by bit, retracing his steps, the madness begins to seep through. Literary production quite frequently plays with other selves, a kind of linguistic avatarism that keeps the play at a distance. When, in 1998, Anne Carson translated the fragments of the Geryoneis (a 6th century BC remnant by the poet Stesichorus), she effectively became him. Donned his cloak, picked up his pen, though alerting us to her presence through anachronisms, inventions and winks. So we can identify the difference, pay attention to the barrier. When we slip into (write or read) the narrative ‘I’ of another self (unreal or historical), we’re still talking about avatars, only with a different name. Books become incarnations, acts of possession.

In Nabokov’s Despair (I quoted it above), we find that the avatar is birthed in doubt. How do we know that the apparition before us is the person we think they are? Little clues, tiny hints. “You’re not yourself”, “this isn’t like you”. We can sow doubt even about ourselves. For Nabokov, this tendency found its climax in Pale Fire, the book itself becoming an avatar of a recently deceased poet, John Shade (there’s ‘shade’ again, the sighted slip of a spirit passing through). To read Pale Fire, we have to adopt the guise of both deceiver and deceived. We have to read the book at face value (a book of poems with an appendix attached), and then to unspool it like the ball of string that it really is. Again, the ‘avatar’ – as double, cloaked identity, mask – is not what it seems. Look closer.

The avatar can make us. But so can it break us. Here’s Gogol, pathologizing the anxieties of 19th century Russian bureaucracy. In The Nose, a petty official’s nose (of course) separates itself from his face, and lives in the place of this poor, mutilated man. It becomes him, wandering the streets, attending salons, and generally being better at being himself than he is. Avatars have power, too. It’s anxious stuff. Did you think we were safe from their maladroit intentions? Credit card fraud, mass data breaches, pilfered logins and email addresses. The invisible tide of digital crime is prefaced on the hacker’s ability to ‘be’ you without having to look like you. The mask is your frustratingly unmemorable password, an intangible watermark, an address. The harshest form that the avatar can take is also the most opaque.

But where is all of this pointing? Toward freedom (yes)? Toward madness (oh certainly, yes)? It would seem that to come-across differently, to ventriloquise an identity, can afford us a little wiggle room. But it can also destroy us. Gertrude Stein adopted, like a cloak, the autobiographical voice of her life-partner Alice B. Toklas in 1933. ‘Sort of’ becoming them, imaginatively. It’s powerful, inspiring stuff. But only sort of. And this difference (the ‘sort’) makes all the difference. As soon as your slippage of self becomes real, becomes more than make believe, then we experience an agonising break; a long dark auto-de-fe of the soul. Everything goes up in flames. Be somebody else and you risk mistaking them for yourself. Okuyama knew it. Nicholas Cage knew it. The actor who ‘becomes’ the acted. What a risky business this is.

Let’s wrap. The avatar is an identity assumed. Blurrily, it entails behaviours both sacred and profane. The avatar brings us power and it brings us poison. Just learn to remember where the mask ends and you begin.

Owen Vince is a writer and sound artist from London. He co-hosts the film podcast Muub Tube.

From 1st July 2021, shipments from the UK to EU will be subject to Value Added Tax (VAT) charges). Orders placed through Magma Poetry are shipped Delivery Duties Unpaid and customers in the EU may have to pay import VAT (and customs duties if payable) and a handling fee in the receiving country.
Magma 80: Avatars 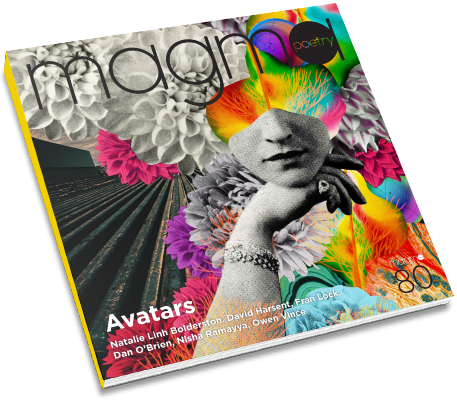 On the Wing
Editorial
SO YOU WANT TO BE SOMEBODY ELSE?
Latest Issue
Magma 80: Avatars

@MattHaighPoetry: Decided to share my poem from the latest issue of @magmapoetry here, as it’s been chosen as one of the samples for the issue :-) The link to more great poems from the mag is here: https://t.co/QxSl3EzFK3 https://t.co/536g1tRGNj

The 82nd issue of Magma Poetry, edited by Nick Makoha and Gboyega Odubanjo, is in partnership with the Obsidian Foundation and will focus on Black poets. The submissions window for M82: Obsidian is open from 1st July – 31st July…