It was Robert Frost who first said that poetry is what gets “lost in translation”. This week, with the gaze of the literary world trained on the South Bank and its ambitious Poetry Parnassus project, bringing together writers from all the competing Olympic nations, the concept of translation and the many forms it takes is being re-examined, with the focus (rightly) on what’s gained in translation rather than what’s lost.

W.N. Herbert’s article ‘The Infection of Setting’ in Magma 53 explores the process of collaboration between poet and composer and how, in such cases “two musics are at work, two approaches to the articulation and framing of language”. To attempt such collaboration, Herbert believes, is to “enter into dialogue with both the artistry and the aspirant limitations of the other”. Perhaps two different ‘musics’ are equally apparent even when the collaboration is between poet and translator, two people working solely within the medium of language.

From versions to literal renderings, translation takes many forms. Reading some of the interviews from Poetry Parnassus, the words of Brazilian poet and translator Paulo Henriques Britto stood out. Britto is from Rio de Janeiro and has translated around 100 books as well as publishing six volumes of poetry. In conversation with S.J. Fowler, he discusses the nature of the relationship between text and translator:

“…the untranslatable—or hard-to-translate—moments of a poem are precisely those in which the poet has managed to use what is most idiosyncratic, most contingent, about a language as a creative resource. Think of Yeats’s line “in the foul rag and bone shop of the heart”; the fact that the phrase “rag and bone shop” means what it means and includes the words “rag” and “bone” is a mere accident, but no other phrase would have the same force in association with “of the heart.” It is a stroke of genius, and it is, I think, untranslatable”.

Those idiosyncratic, contingent moments may be the very same moments that make a poem most striking. Of course, part of what defines a poem a poem is its particular form, aspects of which may be impossible to reproduce. You never step into the same river, or the same poem, twice. This seems something to celebrate.

Perhaps we often engage in a kind of translation even within the same language. The interesting online project ‘Like Starlings’, in which writers are paired up and asked to respond to each other’s poems (in English) almost involves a kind of versioning, a kind of riffing on the other poet’s work, whether the resulting new poems repeat elements from their source or diverge from them. Participating in the project a few years ago, I often felt like I was undertaking a strange kind of translation, working with someone else’s meanings and coded expression.

All language is a kind of translation, from world to sign. Often, poets fail at accurate translation even in their own language. We feel inarticulate most of the time. But the moments when poems succeed in translating something of the feeling that gave rise to them are sublime and worth a thousand near misses and approximations. In the words of Nuala Ni Dhomhnaill, “a poem is a smuggling of something back from the otherworld, a prime bit of shoplifting where you get something out the door before the buzzer goes off.” (RTE 1, July 1995).

(Poetry Parnassus runs until July 1st at the South Bank.)

From 1st July 2021, shipments from the UK to EU will be subject to Value Added Tax (VAT) charges). Orders placed through Magma Poetry are shipped Delivery Duties Unpaid and customers in the EU may have to pay import VAT (and customs duties if payable) and a handling fee in the receiving country.
Latest issue
Magma 84 — Physics 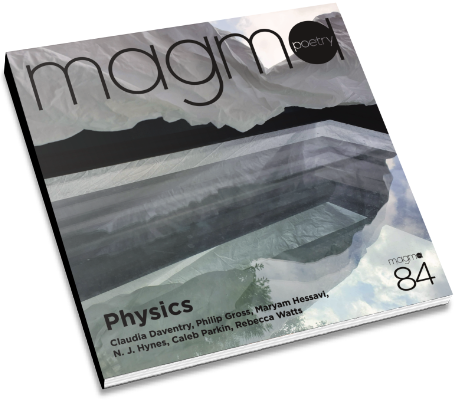 Magma on Twitter
Have you submitted your entry yet? The deadline is next Tue 31st Jan 2023! The Magma 2022/23 Poetry Competition is open for entries in both categories: The Judge’s Prize – poems of 11 to 50 lines The Editors’ Prize – poems of up to 10 lines https://t.co/s3lBeyLoAy https://t.co/9zZHPBHBrP

@nicholas_hogg: Very happy to announce poems featured in my @brokensleep collection, Missing Person, published this autumn, are forthcoming in @BadLilies @Poetry_London and @NineArchesPress Under the Radar. Big thanks to the editors for taking work on mystery stones, UFOs, and Fleetwood Mac x https://t.co/VzM1YYWvXl