The submissions window for ‘Anthropocene’ is open from 1st March – 31st March 2021. We welcome poems that have not been previously published, either in print or online.
Up to 4 poems may be sent via Submittable, or by post if you live in the UK. Postal submissions are not acknowledged until a decision is made.

A bride wears a train
—of three thousand
—–peacock plumes

She walks down the aisle
—like a planet
—–trailing her seas

every wave an eye
—shivering with the memory
—-of the display

every eye
—a storm
—-held in abeyance

As with all life-threatening crises and impending disasters, the human desire is to move swiftly to determine cause and apportion blame. Are we all implicated in the Anthropocene? The challenge is to understand our part and to move together towards creative solutions to the crises we all face.

The concept of the Anthropocene has been criticised for grouping people together as a ‘species.’ But different groups have different impacts on the Earth. A hunter-gatherer who has never used fossil fuels clearly does not have the same impact on the environment as an executive working for one of the companies known as the ‘Carbon Majors’. The fires, floods and famines brought by climate change may worsen existing inequalities. Can poetry create a place for resilience and resistance?

We welcome Indigenous responses to the idea of the Anthropocene, and interpretations that provide alternatives to western ideas about it. What are the issues that Indigenous communities are facing? How do different cultures understand their relationship to the environment? What can others learn from their insights into how to care for the Earth?

The oil industry links lighting and ink, gasoline and Vaseline, plastic and climate change, resource wars and the ‘deep time’ of fossilisation. However, oil often goes unseen; it is ‘our soul-shadow… the form we cannot name,’ as Sheryl St. Germain writes in ‘Midnight Oil.’ We welcome poems that shed light on this powerful yet explosive substance, and that think about the forms of energy we will need in the future.

Take us on journeys into ‘deep time’ and transport us into the far future. Like artist Jade Montserrat in ‘Peat,’ or poet Hugh MacDiarmid in ‘A Raised Beach,’ show us the geological processes that shape our dynamic Earth’s past. And what will your local village, coastline or city look like in a hundred years, a thousand years, or a million years?

If the Anthropocene is the ‘new age of humans,’ what role do our fellow plants, creatures, fungi and microbes play in it? As Anna Tsing puts it, ‘Humans cannot survive by stomping on all the others.’

The Anthropocene is a geological concept, but we cannot consider the science without considering whose science it is. We cannot consider climate chaos as a scientific matter without consideration for the human costs, in terms of how humans have exploited other humans for capital gains, and how humans and environments will suffer in the epoch determined by some to be the Anthropocene. In writing about the interdependence between all species on the planet and how we reside together, can we create poetry for climate justice and beyond? We are keen to read submissions that explore ‘cosmologies of being and becoming,’ as Mama D from Community Centred Knowledge puts it. We are open to perspectives on this subject matter that we might not see first-hand in the global north.

Misanthropocene, Anthrobscene, Manthropocene, Chthulucene, Petrolcene, Capitalocene, Plasticene… artists, poets and scientists are inventing their own names for this brave and unsettling new epoch. What is your take on the debates surrounding it?

Way back in 1945, Albert Einstein insisted that we need to ‘let the people know that a new type of thinking is essential if mankind is to survive and move toward higher levels,’ while Mahatma Gandhi famously observed that ‘The earth has enough resources for our need, but not for our greed.’ What role can poetry play in reimagining Earth’s future?

We look forward to reading ecopoems and experimental poems, apocalypses and utopias, poems for our unquiet Earth in an age of crisis.

they sing, these birds
———-up above the smoke
you can only see from a distance, brown
and insistent as a river

Wanting to submit to Magma 81?
You may submit up to 4 previously unpublished poems in a single Word document.
We are now accepting simultaneous submissions – but please withdraw your submission or contact us if it is accepted for publication somewhere else first. The editors’ decision is final and no correspondence will be entered into. Go to Submittable for more details. 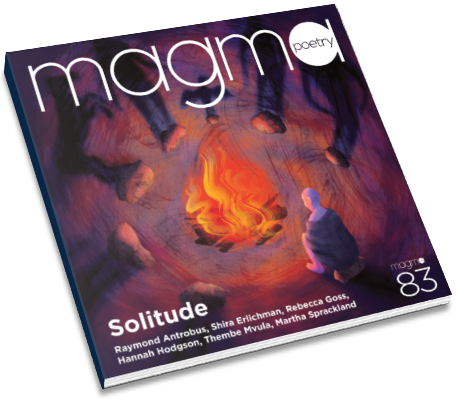 Magma on Twitter
@munozpoems: 📚🤓Thanks so much @magmapoetry editors @LisaDMKelly @IsabelleBaafi & @ilya_poet for taking a poem about my @scottishbktrust RLS fellowship in Grez-sur-Loing for their ‘Solitude’ issue. Four years ago I was staring at this river, trying to write! ✍️😬 https://t.co/cbfigg0itU